Let me pick up where we left off because I just loved our journey into this very holy city, Jerusalem.

Ariel explained that Jerusalem is most unique because it is the center for three major religions: Muslim, Judaism, and Christianity. And since the Hebrews, God’s chosen people, entered it after their exodus and wilderness wandering, Israel has been the hot seat of conflict.

When Israel became its own nation in 1967 and new boundary lines were drawn (to what they are now), Jerusalem has been a city shared by all these factions.

For the Jews, Jerusalem has been God’s dwelling place. In the temple, the actual place where God “dwells,” is in the very center of the temple…a place called the Holy of Holies. And every year, Jews have traveled from afar to worship in Jerusalem.

On the highway, we hit some traffic as we got closer to the city because, believe it or not, it was the night before a big Jewish holiday, Shavuot, which is the Feast of Weeks. The Jews were headed to their city, making their pilgrimage!

To enter the city one must ascend the hills to get there. Historically, as Jews travelled up and into the city, they sang certain Psalms, the Psalms of Ascension. So as we, that first day in Israel, ascended toward Jerusalem, Ariel called for silence and played a song for us, “Old Jerusalem.”

It was amazing! I felt like a pilgrim on the road with hundreds of other pilgrims, who had journeyed very far to be in God’s city. There we were ascending to Jerusalem, just as millions of pilgrims had done before us. Some on foot. Some on the backs of animals. And for those of us in the twenty-first century, some in automobiles.

Jerusalem is holy, it is old, and it is a growing metropolis. I was surprised how much “civilization” there was before we’d reached the city proper. Jerusalem has suburbs!

Even in a bus, the view of this magnificent city is breath-taking. And just as I’d expected and hoped, the limestone white of all the buildings (new and old) captured my heart and imagination.

While many signs and modern conveniences abound at every turn, it is very easy to imagine you are in the ancient past.

The trip to our hotel went fast, but our weary and hungry bodies were happy to arrive.

The hotel was a bustle with Jews who were dressed up for worship on the eve of Shavuot. The streets were relatively quiet. Shops were closed. Ariel told us it would be that way through Wednesday because once the sun went down, it was a holy day and that meant no work.

Even pushing a button on an elevator is considered work!

It was wonderful to see families dressed in their traditional clothes – especially the men in their hats. It was “other worldly.”

After dinner, we literally crashed. I’d made it to a bed at last!

Morning came and we were off to the Mount of Olives as soon as breakfast was over.

I’m told our hotel is in the center of the city, so we traveled east through the city and across the Kidron Valley, up to a small mountain range that is home to mountains as Mt Scopus and the Mount of Olives. Why is it called the Mount of Olives? Great question! It was once covered in olive trees…which are still in abundance in the area.

From the Mount of Olives, looking west, is a tremendous view of Jerusalem and the Kidron Valley that lays between the two. Looking east is a bleak wilderness. The contrast between the two views is shocking. 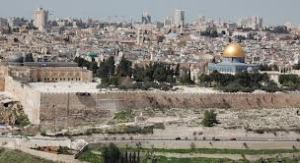 Ariel shared that this wilderness is the “desert in the shadow of the rain” because the mountain range works as a blockade, trapping rain clouds over Jerusalem. By the time the wind blows the clouds out to the desert, they are empty.

The great amount of history here is overwhelming; you might recall that King David would often enter Jerusalem from the Mount of Olives. Jesus was at the Mount of Olives a few times, especially to pray. And it was from here that Jesus was met by a crowd that first Palm Sunday.

There are three cemeteries between Jerusalem and the Mount of Olives, all representing the three religions: at the Mount of Olives is a large Jewish Cemetery. What look to be tombs dot the hillside, but they’re actually just large grave markers. The Jews bury their dead in shrouds, just as they did in Jesus’ day, so there are no coffins or caskets. 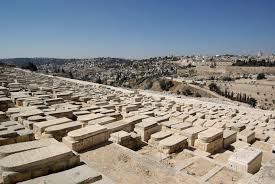 Further down, closer to Kidron Valley, lies a small Catholic (Christian) cemetery, and up right next to the eastern wall of Jerusalem is a Muslim cemetery.

The “old city of Jerusalem” still has a wall around it! Ariel explained that with each leader/king/emperor, the walls expanded out, and it is so old that there are parts of it (like the steps on the south wall) that historians are sure Jesus would have seen (or walked on).  So cool!

This Old City is divided into four sections, one for each of the religious groups: the Muslim Quarter, the Jewish Quarter, the Armenian Quarter, and the Christian Quarter.

Every wall has gates.  Historically, these gates were the entry points into the city. They still exist and most are in use today.

A bit of history that fascinates me is that along the east wall is the Eastern Gate, also known as Gate Beautiful…and it is completely sealed.

The Temple Mount and the East Gate are both in the Muslim Quarter, so to ensure that Jesus, the Messiah, will NOT return, they’ve blockaded the gate. 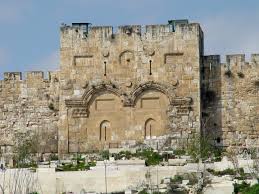 Today, Ariel told us that there was a king who first had the gate sealed to keep the crusaders from coming in, so it’s our thought that perhaps the Muslims are trying to prevent anyone from opening the East Gate for fear that would be the catalyst for Jesus’ return and the end of the world.

We also learned that the Muslim cemetery, literally right outside the East Gate, is another insurance policy to keep Jesus from returning. Muslims know that no practicing Jew would ever walk through a cemetery before entering the Temple because that would make them unclean.

From the Mount of Olives, we ventured down the Palm Sunday path. In Jesus’ day, it would have been the same path, though not covered with asphalt. It was steep and slippery, as Ariel would say, “stippery.”

AC has told us that anywhere something holy happened, a church has “venerated” it. In other words, they built a church on the site. As a result, there are LOTS of churches…from all three religious groups.

The path we walked was walled on both sides, a neutral zone between two churches’ lands. Along the path were beautiful flowers, a few gardens, and even an ancient burial site.

At the bottom of the path, but well before reaching the walled city, was the famous Garden of Gethsemane…the place Jesus and his disciples went to pray the night of his arrest.

Guess what!? There was a big church there! We did get to walk through a garden that had really old olive trees…really old! It was easy to picture Jesus praying in this quiet place.

We traveled west in the bus to reach what’s called Mount Zion, or the City of David, which literally bumped right up against the southern wall of Jerusalem. 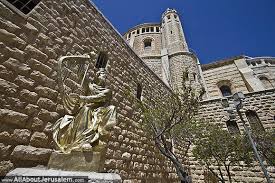 Here we saw a large statue of David, where some believe he was buried. And we ventured up into a space that is generally accepted as where the Upper Room would have been. The room we went into was not the actual Upper Room but connected to a church (you guessed it!), Hagia Sion, marking the site.

This room has known many owners over the centuries, some Christian some not. I LOVED what Ariel said to that: “Once a site is holy, it is always holy, no matter the religion.” 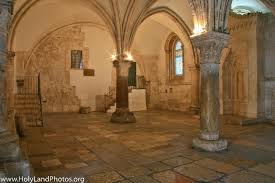 Speaking of songs. We sang a few today.

In the Upper Room we sang a verse from two different hymns about Jesus’ presence. The echo could have been angels singing it was so beautiful. It was my holy moment of the day.

I’ll break here and pick up with our journey to Bethlehem in the next post!

Follower of Christ, wife, mother of three, daughter, sister, friend. Seeker of ways to share the love I've found in Jesus with others. View more posts

One thought on “First Day in Jerusalem”