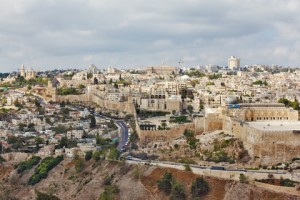 For a girl who hasn’t spent much time in airports, it was a day full of them! Four, in fact. Each one different from the other in so many ways.

Oklahoma was quiet. It was early morning. And, believe it or not, OKC is pretty small as airports go.

There are 37 in our group today (5 of our friends will meet us in Tel Aviv). It was quite the sight to see all of our luggage with our little, yellow pom-poms congregated together outside the ticket gate. That was a lot of bags!

Many in our group managed to get selected for TSA Pre-Check so their shoes stayed on.

But I made it through with flying colors. One in our group, however, was greatly delayed through the security process, having her hands swabbed twice for explosive residue and her bags completely emptied. But she made it past and kept her smile on straight.

A few of us grabbed our LAST Sonic breakfast burrito and drink before we boarded for Dallas.

On our first plane of the day, I gulped my apple juice in record time because the descent began almost as soon as we’d hit cruising altitude.

I did enjoy my aisle seat, and my aisle counterpart entertained me. When he wasn’t badgering the traveling pilot seated next to him (all in fun!), he gave me a short-course in traveling, something he does regularly. So when we got off the plane, I followed HIM.

DFW Airport was fun. I was wishing my boys were there to experience the Sky Tram. To get from one terminal to the next, the little bullet of a tram we took reminded me a bit of a Disney World ride. Its windows offered a great view of the surrounding structures – mostly airport and freeway.

We had time to snack and take our potty breaks then we were off to show our passports at the next gate.

My window seat from Dallas to Newark, New Jersey was great…especially as we started coming into New York. Smog prevented me from seeing very far out, but pretty soon the world traveler sitting by me pointed out the NY skyline.

Sure enough! There it was!

I was giddy. Felt like a kid. New York! New York!!

We made a turn as we got a little closer, and I saw her. The Statue of Liberty. It is official. I’ve seen her!

As we taxied to our gate, I was snapping photos from my window seat of a much closer skyline –  I could make out the Empire State Building, the new World Trade Center Tower, and an entire skyline of Devon-like Towers, though my seat mate said the actual one would be dwarfed among these NYC skyscrapers.

After sitting for so long many of us walked the terminal as we pondered where we’d eat our final American meal. Three and a half hours went quick only to find ourselves digging out our passports again to get on our third and final plane of the day.

The plane to Tel Aviv had three rows of seats with touch screen media devices on the backs of each seat – think backseat DVD players. One for each of us! I had fun tapping buttons, scrolling through movie titles and playing a little Hangman and Solitaire.

All day our group had been scattered throughout the planes, but I always seemed to be with at least one person from our group, though never with one of my buddies.

That is…until someone sweet offered to swap seats with my friend. How great to spend the long flight with her! We giggled our way through the first hour of the ten hour flight. Our third-seat-man on our row was from Israel, and he happily told us much about his homeland.

Then it hit me…just how tired I was. The movie list was tempting me, the smell of airplane food confusing me (it was after 11pm), but what I really wanted was a bed.

My husband will nod knowingly when he reads that. I love curling up in my bed, reading till I fall asleep.

Not tonight. Tucked into my middle seat, I tried and tried to get comfortable…to no avail.

I ended up watching a movie till my eyes wouldn’t stay open and I finally slept.

We broke fast (they do actually say “break” fast) with airplane finery and barely had enough time to find the bathroom before it was time to land. We’d arrived!

My tummy started to get a little nervous, worried about entering a foreign country – would they go through our bags? Would I be able to answer all their questions? The good news is it all went well for everyone. The man who stamped my passport was very friendly even. He asked where I was from and I tentatively said, “Oklahoma,” expecting him to screw up his face in confusion.

Instead he said, “Oh you are OKC! You have very good basketball team!” We were instant friends!

We met our guide, Ariel (pronounced R-E-L) – a man, not the mermaid! And he helped us get loaded on our busy and we headed to Jerusalem. The whole way Ariel shared history, geography and even a little about the political tensions of the area.

I’ll end this post here because there is so much more to share about our first night in Jerusalem.  I know there will be more history and learning opportunities to come in the following posts – but this is how we got started!

Follower of Christ, wife, mother of three, daughter, sister, friend. Seeker of ways to share the love I've found in Jesus with others. View more posts

2 thoughts on “Traveling to Israel”